Commonly used tests include the t-test, ANOVA, and Kruskal Wallace

Written by Rani Powers, PhD
Updated over a week ago

When comparing groups using a barplot or boxplot, it is typical to ask "What is the statistical significance?" Pluto allows you to perform several of the most commonly used statistical tests.

See below for information on when to use each test, and how the statistic is calculated. 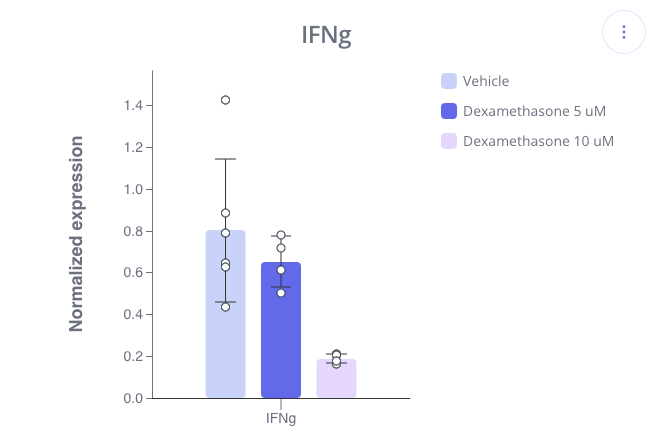 This is a two-sided test for the null hypothesis that 2 independent samples have identical average (expected) values. This test does not assume that the populations have identical variances. The output of the t-test is a p-value, which quantifies the probability of observing as or more extreme values assuming the null hypothesis, that the samples are drawn from populations with the same population means, is true. Thus, a low p-value (e.g. 0.01) indicates that the measured difference was unlikely to have occurred by chance.

In Pluto, the two-sample, unpaired t-test is calculated using the scipy.stats.ttest_ind function in Python with the following parameters:

The ANOVA test has important assumptions that must be satisfied in order for the associated p-value to be valid.

If these assumptions are not true for a given set of data, it may still be possible to use the Kruskal-Wallis H-test (see below).

In Pluto, the one-way ANOVA is calculated using the scipy.stats.f_oneway function in Python.

This test assumes that H has a chi square distribution, therefore the number of samples in each group must not be too small. A typical rule is that each sample must have at least 5 measurements, and this requirement is implemented in Pluto.

In Pluto, the Kruskal-Wallis H-test is calculated using the scipy.stats.kruskal function in Python.

Did this answer your question?